(Infowars) – In what is sure to elevate race tension to ’12’ (since they are already at ’11’), President Trump has responded to comments from the BLM movement’s leader earlier in the week:

Black Lives Matter leader states, “If U.S. doesn’t give us what we want, then we will burn down this system and replace it”. This is Treason, Sedition, Insurrection!

Trump’s comment follow comments by Hawk Newsome – who chairs Black Lives Matter of Greater New York argued that because violence and rioting appeared to be getting the point across more effectively, those efforts were justifiable.

A tense exchange with Fox’s Martha MacCallum lays out the details (and likely triggered Trump):

MacCallum began by quoting Newsome as saying that he wanted to “shove legislation down people’s throats,” and then asked him, “What exactly is it that you hope to achieve through violence?”

Newsome responded by claiming that the United States had been “built upon violence,” citing the American Revolution and arguing that American diplomacy largely consisted of blowing up other countries and replacing their leaders with leaders we liked better.

MacCallum responded: “The only reason I posed that first question to you the way that I did, I watched you talking on a bunch of different interviews today and you said, ‘Burn it down.’ You said it, ‘Burn it down, it’s time.’ So that makes me think that you want to burn it down.”

This came on the heels of comments from another BLM co-founder earlier in the week. As we detailed earlier in the week, while massive protests continue to rage across the country (and beyond) in the name of George Floyd, Black Lives Matter co-founder Patrisse Cullors admitted during a Friday night interview with CNN that “our goal is to get Trump out.” 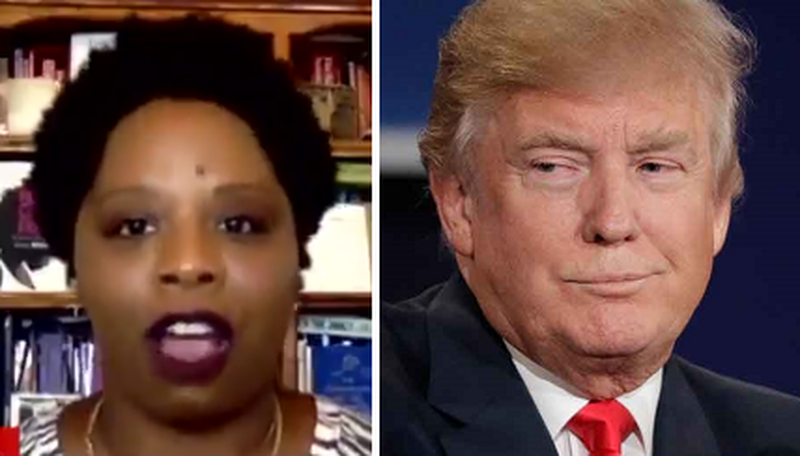 Cullors, who described BLM organizers in 2015 as “trained Marxists,” compared Trump to Hitler after refusing to meet with him, and referred to Immigration and Customs Enforcement (ICE) as the Gestapo, told CNN‘s Jake Tapper (via Breitbart‘s Josh Caplan):

JAKE TAPPER: I’ve heard a lot of criticism of former Vice President Joe Biden from civil rights activists. The election, obviously, will be a choice. How do you think Biden matches up compared to President Trump when it comes to these issues that are important to you?

PATRISSE CULLORS: Trump not only needs to not be in office in November but he should resign now. Trump needs to be out of office. He is not fit for office. And so what we are going to push for is a move to get Trump out. While we’re also going to continue to push and pressure vice president Joe Biden around his policies and relationship to policing and criminalization. That’s going to be important. But our goal is to get Trump out.

President "Trump not only needs to not be in office in November but he should resign now," says co-founder of the Black Lives Matter Global Network Patrisse Cullors. "Trump needs to be out of office. He is not fit for office." pic.twitter.com/T6mLZ11cEv

In 2015, Cullors said that BLM would take “any opportunity we have to shut down a Republican convention.”

Was Tucker Carlson right when he said (and was punished with an advertiser walkout from the ‘cancel’ crew at Sleeping Giants) that Black Lives Matter is now a political party?

"Black [Lives] Matter is more popular by double digits than both the Democratic and Republican parties.

It is almost as popular as the U.S. military. It is much more popular than the pope."@TuckerCarlson warns that the Black Lives Matter movement wields significant influence. pic.twitter.com/1AhsGqHBzo