(Breitbart) – President Donald Trump has said that the drama surrounding Prince Harry and Meghan Markle was a “sad” situation that should not be happening to the Queen.

“I think it’s sad. I do,” President Trump told Laura Ingraham on Fox News on Friday.

“I think this was a blindside,” he continued. “She was blindsided by this whole situation, and I think it’s too bad. From the time she’s been 25, and now she’s 94, she’d never made a mistake. She’s had a flawless time.”

On Wednesday, Prince Harry and his wife Meghan, the Duchess of Sussex, announced via Instagram that they would be stepping back as “senior” royals, would seek to become “financially independent”, and would be splitting their time between North America and the UK in their efforts to live a “progressive” new life.

Buckingham Palace insiders have been revealing that while the Queen, Prince Charles, and Prince William had been aware only recently of the couple’s wishes, the announcement and rapid progression of activities was conducted entirely without their knowledge and that the unsanctioned communication this week left the royal household “hurt” and “deeply disappointed”.

When asked whether Prince Harry should revoke his decision, President Trump said: “I don’t want to get into the whole thing, but I have such respect for the Queen. I don’t think this should be happening to her.”

Saying that he had a “great relationship” with the British Monarch, President Trump went on to discuss the time he spent with Queen Elizabeth II during his State visit last year, remarking on how much shared affection they have for each other. 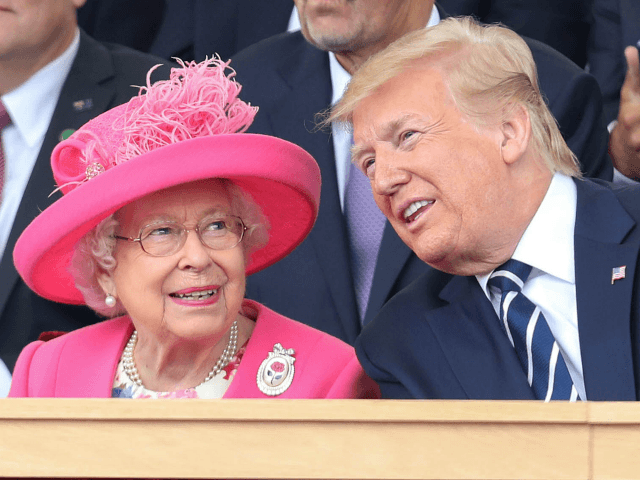 Above: PORTSMOUTH, ENGLAND – JUNE 05: Queen Elizabeth II and US President, Donald Trump attend the D-day 75 Commemorations on June 05, 2019 in Portsmouth, England. The political heads of 16 countries involved in World War II joined Her Majesty, The Queen is on the UK south coast for a service to commemorate the 75th anniversary of D-Day. Overnight it was announced that all 16 had signed an historic proclamation of peace to ensure the horrors of the Second World War are never repeated. The text has been agreed by Australia, Belgium, Canada, Czech Republic, Denmark, France, Germany, Greece, Luxembourg, Netherlands, Norway, New Zealand, Poland, Slovakia, the United Kingdom and the United States of America. (Photo by Chris Jackson-WPA Pool/Getty Images)

“She’s a great woman. I sat with her. I was supposed to be with her for 15 minutes, I stayed an hour and a half… We had a great time… We were honoured. Our country was honoured. I sat with her a long time. She was smiling and laughing the whole time…We have a very great relationship,” he said.

During the State Banquet at Buckingham Palace in June 2019, President Trump honoured the Special Relationship and said the Monarch was a “great, great woman”, saying: “She has embodied the spirit of dignity, duty, and patriotism that beats proudly in every British heart. On behalf of all Americans, I offer a toast to the eternal friendship of our people, the vitality of our nations, and to the long-cherished and truly remarkable reign of her Majesty the Queen.”

Jill Biden’s First Husband Backs Trump: ‘I Was Betrayed By The Bidens,’ Claims Their Love Story A Lie