(Breitbart) – Hong Kong democracy supporters joined a March of Gratitude rally on Sunday to openly thank U.S. lawmakers for backing their fight against Beijing rule and their desire to live in freedom not tyranny.

Some held banners reading “President Trump, please liberate Hong Kong” and “Let’s make Hong Kong great again” — a riff on his 2016 campaign pledge to make America great again. One showed the president standing atop a tank with “Trump” emblazoned on the front and side.

Sunday’s show of defiance by thousands of marchers in the former British colony follows skirmishes overnight between police and protesters, with tear gas fired for the first time since the November 24 district council vote and a man assaulted as he tried to clear a protester barricade.

Thanks to #usa rally in #HongKong pic.twitter.com/FUs0n50BG0

Hong Kongers have rallied in huge numbers over the last six months, fuelled by years of growing fears that authoritarian Communist China is stamping out the city’s liberties in favor of centralised control from Beijing.

At one street gathering protesters said they were determined to keep up the pressure on local authorities after the election victory.

“I would like to send a message to the government: we are not done and this is not over,” one 27-year-old protester told AFP, who declined to give his name. 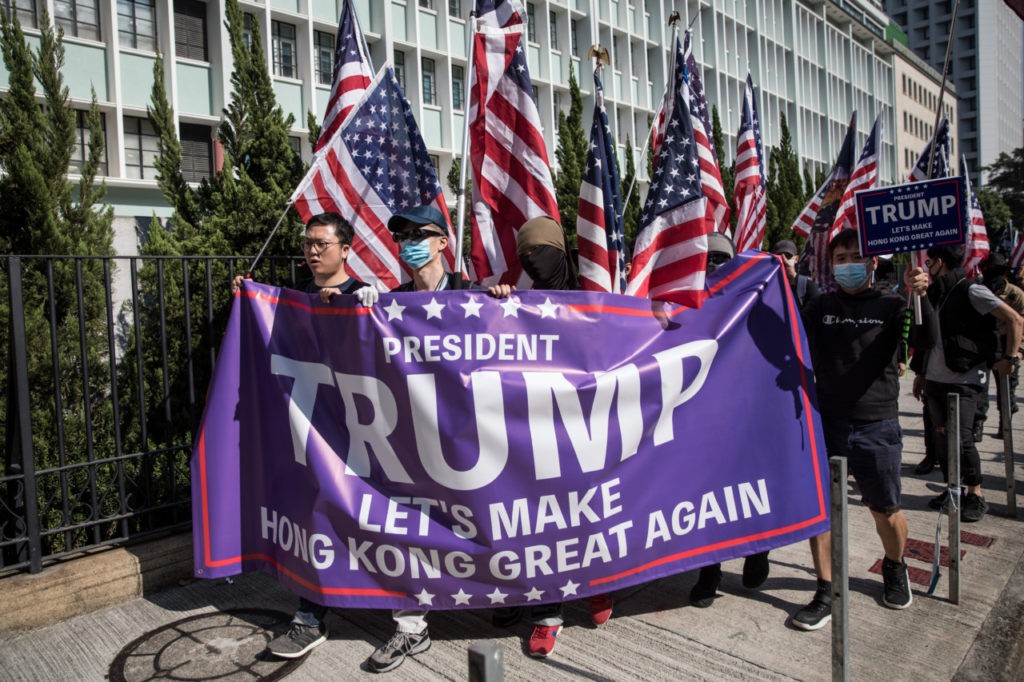 Above: Pro-democracy protesters take part in a March of Gratitude rally to say thank you to the United States for their support on December 01, 2019 in Hong Kong, China. Demonstrations in Hong Kong stretched into its sixth month as pro-democracy groups won the recent District Council elections, continuing demands for an independent inquiry into police brutality, the retraction of the word “riot” to describe the rallies, and genuine universal suffrage. (Chris McGrath/Getty Images)

Elsewhere, a 13-year-old girl, who gave only her family name, Leung, joined the protest surrounded by people waving U.S. flags and singing the American national anthem.

“I believe Hong Kong people will continue to take to the streets, otherwise the government may mistakenly believe that we have let go of our demands,” she told AFP.

“I will join as often as I can, even just to make the headcount larger.”

The open display of defiance against the Communist Party of China came after a similar rally last Thursday in which thousands of demonstrators in Hong Kong staged a “Thanksgiving” rally in response to President Donald Trump signing two bills in support of the city’s pro-democracy movement. 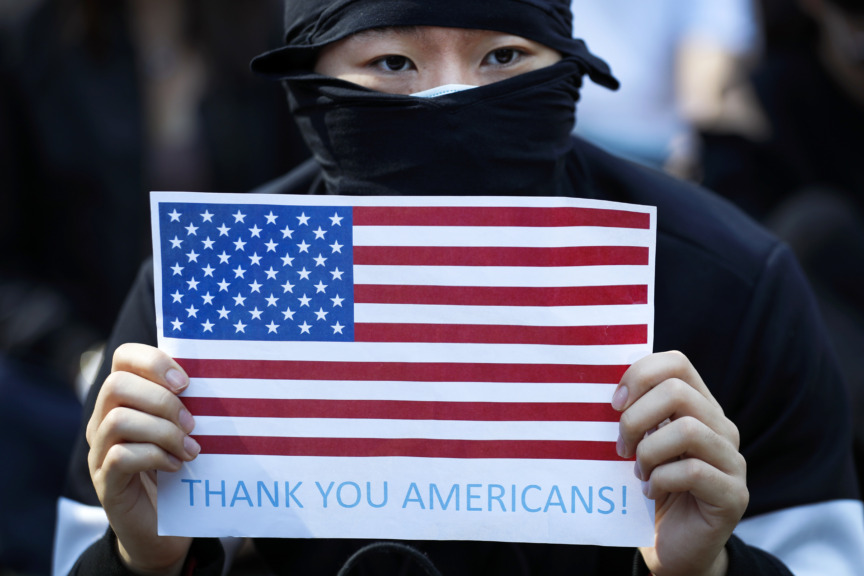 Above: Protesters march to up pressure on the Hong Kong government in the disputed former British colony that now looks towards America for a future based on the democratic rule of law (AP via GETTY).

As Breitbart News reported, some draped themselves in U.S. flags and expressed gratitude for the Trump administration’s support.

“The rationale for us having this rally is to show our gratitude and thank the U.S Congress and also President Trump for passing the bill,” student Sunny Cheung, 23, told Reuters. “We are really grateful about that and we really appreciate the effort made by Americans who support Hong Kong, who stand with Hong Kong, who do not choose to side with Beijing.”

“I was confident Donald Trump would sign the law because we are fighting for universal freedom. Everyone globally should support that,” another young woman told the news outlet. “But we do want to give thanks to those around the globe that support us, a small city like Hong Kong, we thank them for their attention.”

Hong Kong’s protests began in opposition to a bill that would have allowed extraditions to mainland China. After months of pressure, the bill was finally withdrawn, but the movement has now snowballed into wider calls to protect the city’s freedoms.

Boom! President Trump Promises To Sign An Executive Order To Establish A “Vast Outdoor Park” With Statues Of The Greatest Americans Who Ever Lived!...