(Breitbart) – Rep. Ilhan Omar (D-MN) has introduced a series of sweeping foreign policy bills, including one that would let Congress limit the president’s power to place international sanctions and declare national emergencies.

Omar describes the legislative package, titled “Pathway to PEACE (Progressive, Equitable, and Constructive Engagement),” as “a bold progressive vision to rethink the country’s approach to foreign policy by centering human rights, justice and peace as the pillars of America’s engagement in the world, and making military action a last resort” in a press release. “I believe in a world where there are no young girls living through war, and no nations that are being destroyed,” she declared in the statement.

Endless war is not making our country safer.

It is costing lives, destroying futures, and damaging our reputation in the world.

Today, I’m introducing the #PathwaytoPeace, a new vision for American foreign policy based on peace and diplomacy. https://t.co/TpG8oqk1X7

She spoke about the bills at a panel discussion on Capitol Hill Wednesday, framing them as a globalized approach to U.S. foreign policy.

“These sets of bills are not about a single country or singling out one particular country,” said Omar, who serves on the House Foreign Affairs Committee. “It’s about setting a common set of standards for the world.” 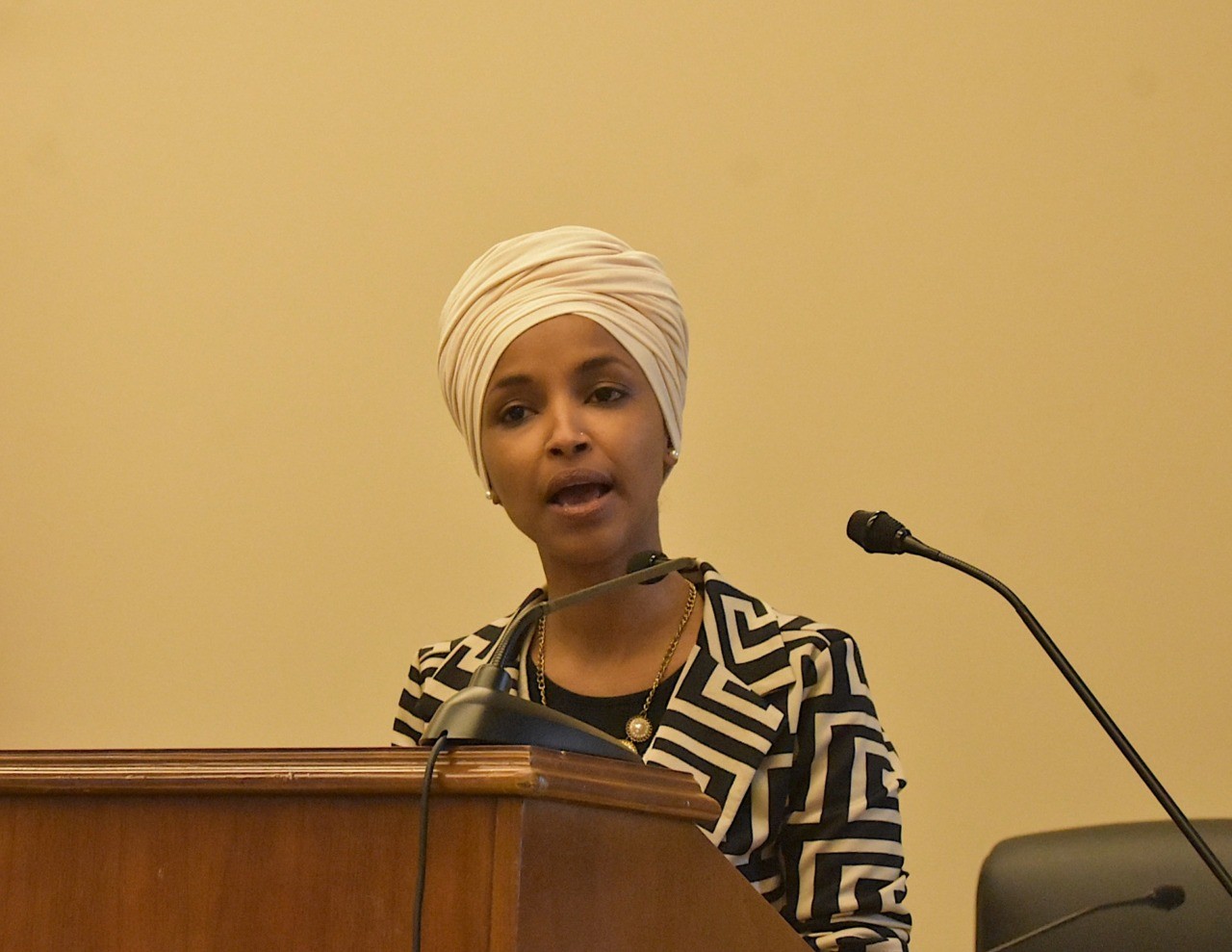 One of the bills, the Congressional Oversight of Sanctions Act, would give Congress power to limit the executive branch’s authority under the International Emergency Economic Powers Act to declare national emergencies and place economic sanctions.

“We need to restore congressional oversight,” Omar said. She explained that the bill “requires an explanation for what foreign policy goal is supposed to be achieved with the given sanction and what the process for delisting an individual, entity or country should be.”

Omar has telegraphed her practical aims for this particular policy. In the past year, the freshman congresswoman has bucked bipartisan majorities to call for the end of sanctions on despotic regimes such as Iran and Venezuela. Last April, she accused President Trump of declaring a “fake emergency” at the U.S.-Mexico border, which allowed him to direct funding towards the construction of physical barriers.

This is a fake emergency! Donald Trump is lying about the border in order to build his monument to racism. https://t.co/hVOVzLYDHw

One of the first bills in the package similarly appears to have a singular target: the nation of Israel. The “Stop Arming Human Rights Abusers Act” would set up “red lines” for foreign nations based on “international humanitarian law,” and any violation would “automatically [trigger] a prohibition on security aid of any kind, arms sales including those controlled by the Commerce Dept. (tear gas, etc.).” While Israel itself is not mentioned in the bill, Omar’s overwhelming discussion of international “human rights” has focused on the Israeli-Palestinian conflict. Last year, when she was denied entry to the Jewish nation, she suggested that the U.S. should “leverage” its annual $3 billion in aid to Israel to “ensure full rights for Palestinians.”

Another bill redirects defense spending – something Omar refers to as “military intimidation and coercion” – and gives it to the State Department.

“[The] Global Peace Building Act… would authorize a one-time transfer of $5 billion dollars from the Pentagon’s Overseas Contingency Operation budget to the State Department to create a new multi-lateral peacebuilding fund,” she said.

Her press release does not specify this entity’s relationship to the United States Institute of Peace, created in 1984 and funded annually by Congress. The institute describes its work as ” a vital investment in reducing violent international conflicts that threaten U.S. national security” in its latest budget justification letter sent to Congress.

Two more bills would require the United States to cede authority and sovereignty to global institutions.

Omar called it an “international embarrassment” that the United States has not signed onto the controversial United Nations Convention on the Rights of the Child.

However, that agreement would severely undermine U.S. sovereignty, as explained in a legal white paper from Americans United for Life in 2010:

Under Article VI of the United States Constitution, all treaties made “shall be the supreme Law of the Land.” Therefore, ratification of the UNCRC will make the document binding under American law and it would supersede any relevant, existing federal or state laws. This will also ultimately limit United States sovereignty by placing American family law and parental rights under international regulation and scrutiny.

Omar also called on the United States to join the International Criminal Court, a global entity that President Donald Trump blocked from launching an investigation into alleged atrocities committing during the war between 2003 and 2004, including by U.S. troops, Afghan forces, and the Taliban.

“Trump has denounced the ICC, the world’s only permanent war crimes court, for its ‘broad, unaccountable, prosecutorial powers,’” Reuters reported. “Washington revoked travel visas for ICC personnel in response to its work on Afghanistan.”

“Congresswoman Omar is putting forward an ambitious and comprehensive package that outlines progressive approaches to some of the most important issues facing the United States and our world today,” Rhodes said.

Human Rights Watch’s Andrea Prasow praised Omar as a leader on the subject: ” With an administration that’s a no-show on human rights, it’s important that Congress press forward with resolutions in support of the most vulnerable, including children, migrants, and victims of atrocity crimes.”

Omar and Rep. Rashida Tlaib (D-MI) were the first Muslim women elected to Congress once they won their races in the 2018 midterm elections. They are part of a small group of firebrand progressive freshmen known as “The Squad,” led by Rep. Alexandria Ocasio-Cortez (D-NY) and including Rep. Ayanna Pressley (D-MA). Since her election, Omar has been mired in controversy, facing scrutiny for a 2012 social media post saying “Israel has hypnotized the world, may Allah awaken the people and help them see the evil doings of Israel.” Days after taking her oath of office, Omar spread a conspiracy theory that Sen. Lindsey Graham is “compromised” by sexual blackmail. The next month, she was denounced by senior Democrats for spreading antisemitic tropes that AIPAC influences U.S. foreign policy with bribes and pro-Israel lawmakers hold “allegiance to a foreign country.” She ultimately kept her seat on the powerful House Foreign Affairs Committee.

More recently, Omar has been mired in more personal controversies. In late 2019, she filed for divorce from Ahmed Hirsi, the father of her children, amid swirling reports of an affair with Democratic operative Tim Mynett. She is now facing scrutiny for alleged campaign payments to his consulting firm. Likewise, long-simmering questions about her marriage to Ahmed Nur Said Elmi in 2009 — which critics have alleged was a marriage to her brother for immigration purposes — have reportedly reached the FBI.

Nancy Pelosi: ‘Every Crisis’ Including Coronavirus Is An Opportunity To Advance Leftist Agenda