‘They should deploy them here to say, man, it’s time to go’

(Infowars) – The father of a 19-year-old boy who was shot and killed in Seattle’s CHOP last week is speaking out against the lawless “no-cop” zone.

Two other teens have been shot this week and many citizens are saying it’s time to shut down the experimental occupied area.

Horace Lorenzo Anderson spoke with KIRO Seattle in an emotional interview following his son’s death, saying, “I ain’t been sleeping. You see my eyes. I’ve been crying. I’m trying not to cry on TV.”

“This doesn’t look like a protest to me no more,” he continued. “That just looks like they just took over and said ‘we can take over whenever we want to.’”

Anderson also said the National Guard should be deployed to “break up” the violent “autonomous zone.” 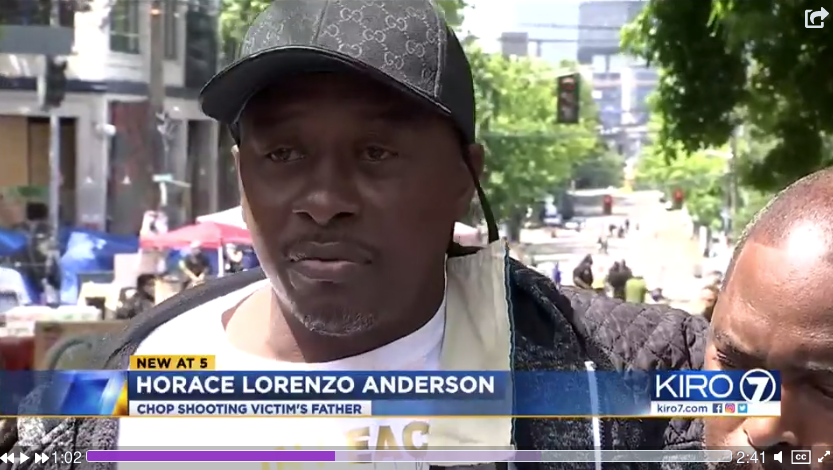 “They should deploy them here to say ‘Man, it’s time to go,’” he stated. “It’s time to move on and break this up.”

Seattle Police Chief Carmen Best also commented on the shootings, telling KIRO Seattle, “I’m not going to let the detractors and the naysayers and the agitators be the ones that are the voice here. There are people who live here. There are multiple people who are being injured and hurt. And we need to do something about it. It is absolutely irresponsible for this discontent to continue.”

Best continued, “Two African American men dead at a place where they claim to be working for Black Lives Matter. But they’re gone. They’re dead now and we’ve had multiple other incidents… Assaults, rape, robbery and shootings.”

As she was speaking, Best was interrupted by a CHOP resident blasting a megaphone siren.

Responding to the man interrupting her news conference, Best said, “That is so rude. This is what I’m talking about. This kind of behavior is irrational and unacceptable.”

"Two African-American men are dead at a place where they claim to be working for Black Lives Matter."

King 5 covered the story in the report below: