(TeaParty.org Exclusive) – Two weeks ago, a suicide bomber entered into the inner perimeter of the Kabul Airport in Afghanistan and blew himself up, killing 13 US servicemembers and 100 Afghans.

Since then, a number of these service members’ family members have spoken out against Biden and his corrupt regime, pointing out just how abysmal his handling of the situation in Afghanistan truly was.

Shana Chappell is the mother of fallen US Marine Lance Cpl. Kareem Nikoui (pictured here) who was killed in the attack at the airport. The grieving mother posted a photo and tribute to her deceased son on Instagram and Instagram deleted her account.

In her post, Chappell expressed understandable anger towards Joe Biden and his incompetent regime. Big Tech does not tolerate dissidence and thus her Instagram account was deleted, though later reinstated. 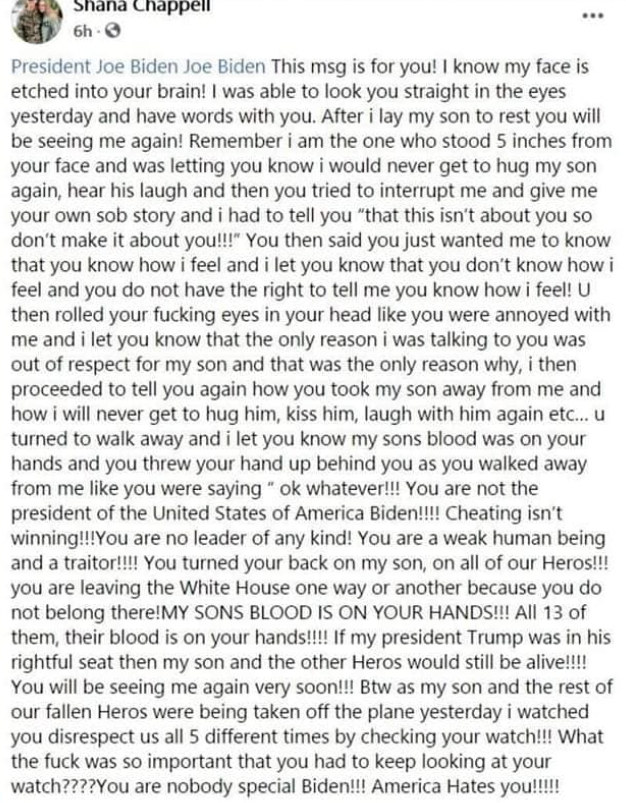 After being censored by the Big Tech oligarchy, Chappell promised to drive to the White House in Washington DC, the day after her son’s funeral to hold a protest and demand that Biden resign “and take his whole corrupt admin with him.”

Chappell then responded to President Trump’s kind words by inviting him to attend her son’s funeral, saying, “It would be such an honor to meet the real President of the United States of America.” 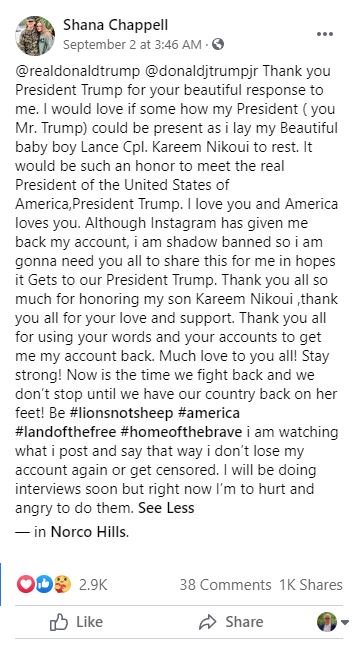 Chappell certainly isn’t alone in her anger towards the Biden regime. Kathy McCollum, mother of deceased US Marine Lance Cpl. Rylee McCollum, lashed out at Biden on radio host Andrew Wilkow’s show, calling him a “feckless, dementia-ridden piece of crap.”

20 yr old Rylee McCollum was one of the 13 Marines killed in the suicide bombing in Kabul.

His mom called into @WilkowMajority & it is truly a must-listen.

Her representative @LaurenBoebert has reached out & is visiting her home. The White House has not. pic.twitter.com/xCLKIY1rU5

Kathy McCollum joined @WilkowMajority after the tragic death of her son in #Afghanistan, US Marine Rylee McCollum. pic.twitter.com/NRAjPquxAn

“This was an unnecessary debacle that could have been handled properly,” McCollum stated, “They had months and months to remove everyone from Afghanistan, and they chose not to. And so they sent in . . . 6,000 troops, and my son, through the laws of statistics, my son was one of the ones who just got blown up in a freaking terrorist bomb yesterday.”

The grief-stricken mother said she decided to speak out publicly because “I couldn’t just sit by idly because I think I need to process through anger instead of tears.”

Her son was just married and was getting ready to come home to be with his wife as she gives birth to their child but was instead senselessly murdered in Afghanistan. Now a mother is without her son, a wife without her husband and most tragically a child without a father.

“That feckless, dementia-ridden piece of crap just sent my son to die,” McCollum said. She then blamed Biden’s supporters for her loss, saying, “So my son is gone, and I just want all you Democrats who cheated in the election or who voted for him legitimately, you just killed my son with a dementia-ridden piece of crap who doesn’t even know he’s in the White House. He still thinks he’s a senator.”

We can’t even imagine her frustration. The stolen election has had grave consequences for her and her family along with 12 other US service members and their families. They have paid the ultimate price.

Their deaths could have and should have been avoided entirely had the 2020 election not been stolen. This has been a tragedy in the truest sense of the word.