(Breitbart) – President Donald Trump on Tuesday celebrated the signing of the “Abraham Accords,” a peace deal between Israel and Bahrain and the United Arab Emirates brokered by the United States.

“We’re here this afternoon to change the course of history,” Trump said. “After decades of division and conflict, we mark the dawn of a new Middle East.”

The president hosted an elaborate ceremony on the South Lawn of the White House, addressing the world from the South Portico. A large crowd of supporters applauded the ceremony and cheered the president’s speech. 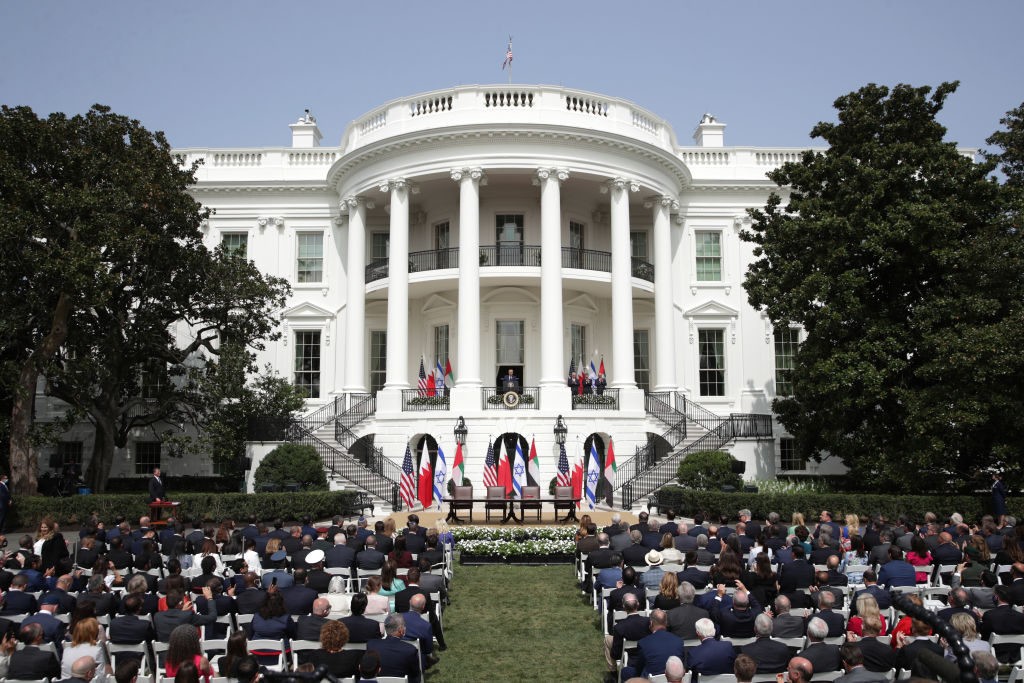 The deal with the three countries means that they will establish embassies in Israel, exchange ambassadors, and normalize economic relations.

“They are going to work together. They are friends,” Trump said.

The deal also moves to open historic sites and holy places in Israel to Muslims, such as the Al Aqsa Mosque.

“The people of the Middle East will no longer allow hatred of Israel to be fomented as an excuse for radicalism or extremism, so important, and they’ll no longer allow the great destiny of their region to be denied,” Trump said. Above: (L-R) Bahrain Foreign Minister Abdullatif al-Zayani, Israeli Prime Minister Benjamin Netanyahu, US President Donald Trump, and UAE Foreign Minister Abdullah bin Zayed Al-Nahyan hold up documents as they participated in the signing of the Abraham Accords where the countries of Bahrain and the United Arab Emirates recognize Israel, at the White House in Washington, DC, September 15, 2020. Photo by SAUL LOEB/AFP via Getty Images.

President Trump recalled his first trip to Saudi Arabia in 2017 where he urged Arab nations to reject terrorism and embrace peace.

“My message that day was very simple, unite against common enemies of civilization,” he said.

Jill Biden’s First Husband Backs Trump: ‘I Was Betrayed By The Bidens,’ Claims Their Love Story A Lie